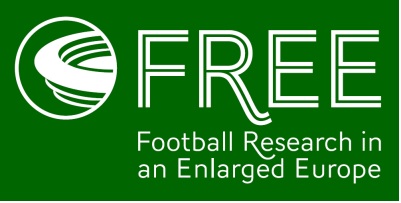 Acronym of the Project: FREE

Full name of the Project: Football Research in an Enlarged Europe

Abstract: FREE is a multi-dimensional research project on Europe's most prominent form of popular culture: football. It aims at studying, in a collaborative and interdisciplinary approach, the socio-historical, cultural, political and anthropological dimensions of football in Europe. It was submitted to the call "The anthropology of European Integration" of the 7th European Framework Programme (FP7) under the area "Diversities and Commonalities in the European Union". It has obtained an evaluation of 14.5 points of 15 and has been selected for funding by the European Commission. The project is designed for a duration of three years and has received an overall grant of 2.4 million Euro.

FREE aims at contributing to a better understanding of football as a highly relevant social and cultural phenomenon in contemporary Europe. The project seeks to combine quantitative and qualitative research methods with the aim of exploring:

• to what extent European football history & memory, competitions & media coverage have created a sub-cultural European public sphere or communication space beyond the borders of the EU, in which shared interest, mutual curiosity and spontaneous intercultural dialogue may take place;

• to what extent perception patterns undergo changes through transnational football encounters and increasing mobility of both players and fans, and to what extent this may enable individuals to develop a certain reflexive understanding of identity dynamics;

• to what extent football has contributed to a strong tradition of discursive gender construction, to what degree this discourse is now being challenged what can be termed "the feminisation" of football (increase of female fans and increase of interest for women's football) and to what extent and how participate women in the transnational encounters and dialogues;

• to what extent the football community in Europe is aware of the existence of a "European Model of Sport" and the need to preserve such a model, and which attitudes prevail towards different models of governance and potential supranational regulation. Through an ambitious dissemination plan the project wishes to reach out to policy-makers, to civil society in the largest sense, as well as to the general public.

Project Leader and Partners FREE has been conducted by a network of 9 institutional partners from 8 different European countries. It has been coordinated by Albrecht Sonntag from the Centre of European Integration at ESSCA School of Management, Angers, France (albrecht.Sonntag@essca.fr , +33 241 735 718).

METU's role: METU had been the Work Package Leader for WP7 titled, 'Football Culture and the Emergence of a European Public Sphere'. In this respect, METU carried out conceptual research work on the notion of "European public sphere" as applied to the football community in the largest sense. This also meant:

• To advance knowledge on concepts of theories of post-modernity by applying major concepts and notions of postmodern thought and identity construction in a "postnational era" in a new and original field.

• To provide input from this research for the different tools of the data collection process.

• To establish an inventory of the presence of "foreign football" in print and audiovisual media (incl. the blogosphere), as well as a detailed overview of audiences for international events in the different countries covered.

• To coordinate and manage the quantitative empirical survey carried out by the consortium.

• To design, to test and to coordinate a functional empirical data collection tool for the implementation of the mass survey that may operationalise and empirically test the relations between the concepts developed by all six thematic WPs, with the aim to lead to a sophisticated attempt to interpret the role and importance of Football in an enlarged European space.

• To compute and disseminate the data set to other participants for their analysis.

• To provide data that may enable researchers to gauge, in comparative perspective, commonalities and differences and European identity issues, related to the hypotheses developed in the different thematic WPs of the project.

• To do so in applying a methodology that takes into account all ethical considerations concerning data collection and data protection (as defined in the European Directive 95/46/EC), especially with regards to informed consent of survey participants and codifying of personal data.

Publications: Alpan, B., A. Schwell and A. Sonntag (2015), The European Football Championship: Mega Event and Vanity Fair, UK: Palgrave MacMillan